When the Whole City is a Room of Their Own

The writer looked for queer spaces in the city. The artist looked at the writer’s room and asked what kind of queer space it was.

The Mind Map accompanies our Travel Log, The Third Eye’s Travel Program that mentored 13 writers and image-makers from across India’s bylanes to reimagine the idea of the city through a feminist lens. An artist worked with a Fellow to visualise their town, village or city, a ‘map’ of the spaces they actually live in; a combination of their mental, emotional, spiritual and physical landscapes to help us imagine the ‘city’ subjectively.

Achal Dodia is an architecture student based in Vadodara in Gujarat.

Achal’s Mind Map is imagined by Vaidehi Sadiwala (@crumbledred), a visual art practitioner based in Surat.

Presenting our third Mind Map of the series, where Achal and Vaidehi try to make sense of their process and how they arrived at documenting a room to enter the City.

How did you both arrive at documenting a room as a mind map for The Third Eye’s City edition?

Achal: That idea came from Vaidehi when she first visited my room. She said you have things in your room that don’t have a gendered perception and looked at them in ambiguous terms. That’s when we thought why not explore the room as a space by itself?

Vaidehi: We also asked ourselves if we could make queer spaces and the city meet in some way. A room is the most personal space, and we wanted to maintain an ambiguity so that no one could ever guess the details of gender, age, sexuality, etc. We were interested in the conversations that idea would start. That was one major spark behind this idea.

We started with Achal’s room but that would have been problematic if we did a walkthrough of the room in a public performance kind of way. Therefore, we rented a room and did a makeover. The video element actually started as a documentation exercise of setting up this rented room.

Why did you choose video as a format?

Achal: We wanted the audience to be invested in the life of the character and the space. In order to arrive at the idea of multiple possibilities and perceptions, we felt the video was a better format.

In the process as well as the final video, we left a lot for people to question and interpret for themselves. For first-hand impressions, we invited people over to the room.

One said, “It looks like there are two people living here - a guy and a girl - because there are shoes that give away that it’s a guy but bangles on the desk hint at the presence of a girl.” So, this statement in itself is questionable. Why do we always think in a binary? Or why do we think these things are gendered?

Vaidehi: When I came on board as a visual artist, I was excited thinking about the endless possibilities of this project and did feel that the 2-D form would limit them. Therefore, I always had this idea of an installation or video. The room we set up was like an installation before we started filming it. Questioning perceptions was an integral part of the process, like Achal mentioned.

Tell us about the objects in the room and how they found themselves there.

Achal: I like wearing nose rings, earrings, but not the ones tagged as men’s rings. I have never associated jewellery design with gender.

While growing up, my father would tell me, “Stop doing this” or “Don’t wear this”.

Even my gestures were controlled; you should move your hands like this, you shouldn’t sit cross-legged on a chair. You should sit with legs wide open like a man. I carry it with me like a trauma, I think. I can’t associate myself with things labelled as ‘men’. That whole idea of chaos is something I have lived with.

The objects in the room emerged from this chaos. With Vaidehi, I wanted to bring that alive in the video.

But, isn’t that also queerness, that whole idea of putting things and seeing…

How close was this room to your actual room?

Achal: It was very close actually. Because I have lived in a lot of paying guesthouses and that room totally resembled the one I lived in a few years ago. It was exactly like that – an old building and lots of abandoned things the owner had left behind. It was dark with not enough light coming in, and somehow, I have always loved that kind of room. Back then, I used to love it because I felt safe in it all by myself.

Vaidehi: This room reminded me of my childhood home in Wadifaliya, Surat. The house where I grew up was as old as 200 years and I still remember those cracks on the wall, and drawings that I used to make on it. In terms of look and feel, my house too wasn’t well lit or ventilated. The resemblance is also what drew me in. It was nostalgia at first sight.

You have used voice, especially phone calls, as a device in the video to show your/room’s relationship with the outside world. Tell us about that audio choice.

Achal: Since I was living as a paying guest, I used to order food almost every day. None of the delivery guys were able to find the location on their own, and so I used to guide them on the phone all the time. It was frustrating. Also we wanted a scene where somebody is coming and the protagonist in the video is wearing things not traditionally associated with my gender. It could make a male living alone a bit fearful, to be ‘seen’ in this way by another male from the outside.

The other instance we use in the video is about the character going out at night. Whenever there were nights out during my college, I was the one who was always terrified of the idea. Going out at night and coming back home, that was scary. I was a young boy and was more prone to getting stopped by the police; I was well aware of the violence and abuse of power of the police towards marginalised people. I used to suggest [alternatives] to avoid running into the police. It’s better to avoid than to confront. It was easier, it was safer for me.
So we fitted that in because we wanted to leave the audience with the thought, kya hua hoga? Why is the character talking so much about safety?

Achal, since you lived in Surat, Baroda and Ahmedabad, which city do you relate to the most?

It’s more of a collective idea that has formed over the years. Safety in any particular city is very subjective. It's always an investigation.

I lived in Delhi for a week. I don’t have a strong opinion about it but I do have mixed feelings. Firstly, there are so many people everywhere. It’s so big that you can come out and still stay in the closet at the same time. Also it has a huge queer history (its parks like Jheel Park and Rajiv Chowk have been landmarks as cruising spots, where men met each through long, lingering gazes… These things make me want to relate to it.

In Gujarat, before 2016, I felt safe. Putting up a story on Instagram has led to threats from my classmates. In my college years, my thesis was on queer spaces and my professor made a [big] deal out of it. I had to start with the pronunciation of the word ‘queer’ itself and there were moments when the professor said, “Haan, haan, tu yeh thesis kar, mazaaa aayega. Mujhe pata hai gay log kya karte hai!” So going through these kinds of things…

What has been your takeaway from the project?

Achal: I was thrilled looking at the end product – the video. I was [very] happy to see it in motion finally. Surprisingly, the mentors told us that it’s also well shot, so that was something. This was also my first ever shoot – like a proper shoot!

Also, when I was writing the introduction to the video, it was on the lines of ‘one lives, many lives in the city’… that actually sparked more questions in me. I wanted to take it forward and then recently I came across a group of anthropologists, architects and artists in Italy. They had put out an open call looking for projects on similar lines. I sent them a proposal with the same title and yesterday I got to know it has been selected and now we are going to develop it.

Congratulations, so glad to hear that.

Thank you. That’s actually been my biggest takeaway: that I would be able to shape this idea in a different way. I have already used the video medium with The Third Eye. Now, I would like to expand it in the field of architecture, using writing based on research.

Vaidehi: Interacting and working with Achal gave me insight and understanding of a lot of things – queer space, queer people, gender, and sexuality. I am able to see so many layers now when I look at the world in a non-linear way. But it would take time to settle it all in before moving to the next level.

Shivam Rastogi is Video Producer and Image Editor, The Third Eye. He is a photographer and filmmaker, who is constantly trying to make sense of the world from behind the camera. A graduate in Journalism & Mass Communication, IP University and post graduate from Mass Communication Research Centre, Jamia Millia Islamia, Shivam has previously worked with Film Companion and Memesys Culture Lab.
PrevPrevious
NextNext 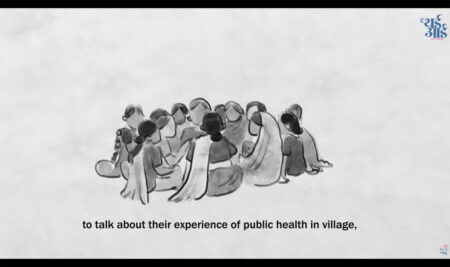 “As a society, how do we understand what is normal and what is pathological?” 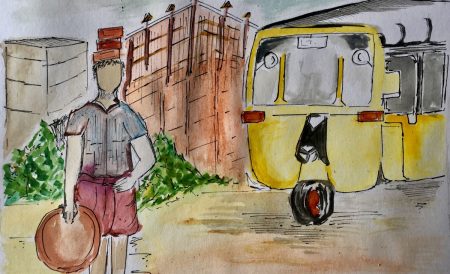