Home » Pedagogy » Want to start a conversation about women and work using the movies?

Want to start a conversation about women and work using the movies?

We have two films, a short workshop and some suggestions.

In cinema, the working woman is often managing the twin axes of shame and pride. What is the work she is supposed to do? What is she not?

We take two cinematic pieces- which focus on women and work – and bring them together to explore everything that makes us uncomfortable or happy, when we go out to work.

With inputs by Srija U and Namrata Mishra

India Cabaret, Mira Nair’s seminal documentary film, is about bar dancers but not just about bar dancers. Although it’s very much about what happens when you have found yourself, through choice or circumstance, dancing in a bar in the mid-1980s. Released at a time when the discourse around bar dancers as a profession, much like sex work, was marred with well-meaning moralising, India Cabaret does the incredible work of uncoupling the joy of hard-won independence from the shame such independence often comes with.

“Do you feel any shame?” asks Nair at a critical point in the documentary. “When I go out at night, sometimes a customer sees me and says, ‘Look, there goes that naked dancing girl, that whore.’ I say, ‘Motherf****r, you enjoyed me on stage, and now you say this?’ That’s when I feel shame,” says one dancer. “If somebody said that to me, I’d say, ‘Here’s my address. Come see me tonight.’ If we speak of shame, then how would we work? And if we don’t work, how would we make money? That’s why, in such a place, shame does not exist,” says the second dancer. “If the viewer does not feel shame, why should the viewed?”

In a cinematic trope put to a shockingly good use, Nair intercuts the story of the bar dancers with that of a woman whose husband visits the bar regularly, their client so to speak. Hence, the public woman and the private woman, or the bad woman and the good woman, come togetherto help illustrate the larger cinematic enquiry: who is free?

India Cabaret has so many moments of female freedom, or the lack of it – as bodies, as labour, as economic agents. By bringing the wife and the bar dancer together, the negotiations women make to survive patriarchy are teased out, provocatively and dangerously.

Juice is a short film directed by Neeraj Ghaywan,best known for his award-winning feature film Masaan. Juice uses the home as a petridish of hidden labours, and the living room and the kitchen as the opposite and unequal forces that make a home hum.

The short film is built around a dinner party in a middle-class home in Mumbai. The men sit in the air-cooled living room, “discussing politics” (appropriately set up as the Hillary Clinton vs. Donald Trump election. The men discuss the inevitability of Clinton’s loss), surrounded by food that keeps emerging from the kitchen in able female hands. All the wives are gathered inside the kitchen, cooking, sorting, cleaning, chatting in a rapidly heating chamber, talking about pregnancy and how childbirth could change their lives and the irreversibility of this change. The dichotomy is laid bare with unsparing details: the sounds of the pressure cooker, clinking of ice in glass, dripping of sweat, and Shefali Shah’s silent close-ups. The scene when the girl in the ‘children’s party’ in the bedroom serves food to the boys, clinches the succession story of gender-at-home.

The final scene of Juice is a quiet end to invisibility. When Manju drags a chair to the living room, sits across the men, sipping her juice, we watch the men squirm, and thank god for air conditioning.

Juice and India Cabaret are in direct conversation with each other where the focus lies on work more than its relation to womanhood. Both the films question the spaces that are traditionally ‘assigned’ to women, the power difference that exists between them, and the men who have access to these spaces. What is it about bar dancing that separates it from the kind of work that women do at home? In Juice, men benefit from the work that is produced by the women in the kitchen, but are wary of their presence in a social setting. The films also help ask questions around ownership of resources, which, as India Cabaret shows, skews power in interesting ways.

Showing the films together may help the viewers question if the two kinds of work – a homemaker and a bar dancer -are that different after all. While Manju’s resistance in Juice is invisible (one that she breaks towards the end), the bar dancer’s working reality is an everyday form of unwitting rebellion, even as it severely impacts their relationship with society. The two films, when shown together, question the artificial binary between ‘good’ work and ‘bad’ work, by asking – who gains from the work in each scenario?

A sex worker, a bar dancer, a homemaker. All of these are workers. The Universal declaration of Human Rights states that “everyone has the right to work, to free choice of employment, to just and favourable conditions of work and to protection against unemployment.” The following TTE workshop helps bring to light the stigma and discrimination that surround certain forms of profession, which leads to certain other forms of violence and social exclusion.

The following questions are asked out loud, as everyone stands in a straight line, facing one direction. All the questions have answers in the ‘yes’ or ‘no’ format. The participants, however, will be given a false identity, one which will denote the answer to the question asked. For example, different occupations are written down in separate pieces of paper. If one of the occupations is that of a domestic help, the participant who the chit has been handed to will answer the questions from the perspective of a domestic help. If the answer is a ‘yes’, they take one step forward and if it is a ‘no’, they take one step backward. The false identities are not to be revealed to the other members of the group till the end of the activity.

The idea behind the activity is to allow one to think of various hurdles each one of us faces as workers. The activity will enable one to be empathetic towards another who is in a highly stigmatised profession. It will also highlight the intersections, disadvantages and advantages of holding a particular job.

At the end of this activity, each one of their identities is revealed. It would then be important to introspect who stands at the front end of the room and who stands far behind, and why? What is it about certain professions that puts us at a disadvantage? Does being a woman affect the kind of work that you do? Can there be solidarity amongst the members present in the room? Are we all, in a way, fighting the same battle?

Identify one woman in your family or surroundings who was seen to be a ‘working woman’ and make a list of what you imagine might be the challenges she faced and how must she have negotiated those?

In the final scene of Juice, Manju sits across from the men, challenging the power instituted in a home environment. The final scene of India Cabaret shows Rekha standing at the beach (after having quit her job as a bar dancer), enjoying herself as the waves crash against the folds of her saree. What do we make of the two endings? 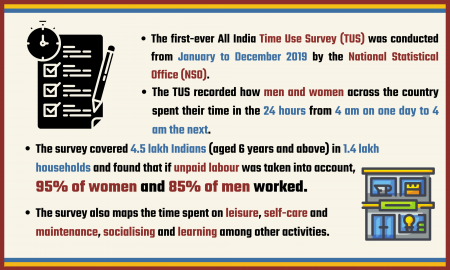 Time Could be the Only Measure for Women’s Work 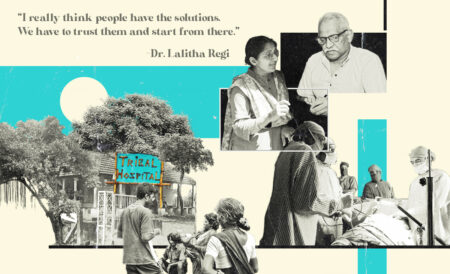 “Communities have to be the first stakeholder in any conversation around health. They will pick the right solutions.” 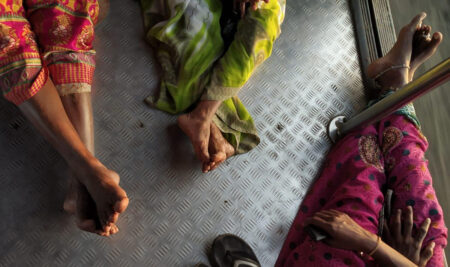