Beyond gender categories, there is the actual living of lives. Srija met Rajam Akka in a chance encounter at a construction site. The rest, as they say, is memory.

I met Rajam akka the summer preceding this. The construction site near home was constantly buzzing with men of all sorts—workers, engineers and labourers. As unpleasant a site this can be, Rajam akka’s presence there was rather refreshing. I noticed her carrying a sack over her head, walking past my house, taking long strides. I was perched on the back seat of my cycle, meddling with the chain that was behaving rather badly today. “The chain goes underneath the metal wire,” I heard a voice behind me say. “Oh, thank you,” I uttered, still struggling, trying to get the grease off of my palms. “Let me try, move aside,” she said and lowered the sack from her head. I stood there, watching her as she fixed my chain in what seemed like a minute and a half, her hands at ease, friends with the grease that was staining them.

Rajam akka had cropped hair, what one would now call a ‘buzzcut’. She wore a checked shirt that was a dull grey, and her lungi could have easily been mistaken for a skirt. “Oil your chain, it will rust otherwise!”, she warned, wiping her hands on her blue lungi. “Yes, thank you!” I said, and before I could begin to say anything more, she picked up the sack and left.

I didn’t see Rajam akka for the next three days. It was on the fourth day that I saw her quarrelling with someone about an unpaid debt. She was frantic, her voice high pitched. I ran into the house, fetched some money from my mother’s wallet and stood near the gate, waiting for her to walk past. When she did, I stopped her, handed the money and said, “This is for fixing my chain the other day.” She smirked, and replied, “The fight was about him owing me money, not the other way around. In any case, I didn’t do it for the money, I did it for myself. I wasn’t allowed to fix cycles. Let alone cycles, I wasn’t allowed to fix anything. My husband once broke his cycle wheel after I mended it for him.”

“Why?” immediately regretting the question, because I partly knew the answer. “I don’t know, I’d like to think that I was better than him,” she chuckled, “Why would he like a woman being better than him anyway?”

“Have you always had short hair?” I asked, instead of looking for an answer I didn’t have.

“Yes, ever since I was a child. My brother died in a road accident and I had to start working for the family. My father took me to his friend’s mechanic shop and I learnt to fix vehicles there. I started wearing my brother’s clothes for comfort. People often mistook me for a boy, and sometimes treated me like one and I had no choice but to embrace it.

Who wouldn’t like liberty even if it comes through a mere façade?

I kept the illusion until I became the illusion. My parents didn’t find it troubling, rather it filled the void their son’s death had left behind. It was only after my marriage that my husband started tormenting me for being this way. I don’t remember the date anymore, but what I do remember is the year of leaving. I was fifteen when I left home. My father died three days before my wedding and the last thing I wanted to do was leave my mother alone in a city full of ruins and cruelty. I didn’t have a choice. I packed my things and left with my husband. After an entire evening of being in the train, I looked at him and asked, ‘Where are we going?’ He didn’t answer and I kept looking outside the train window, trying to make sense of the words painted across the walls of every station the train stopped at. It wasn’t until the following week that I got to know he had brought me to Madras. My mother would send me letters but he rarely read them out to me. I think he was afraid that I was very young and that I would run away. He left for work at 8 am every morning and I would desperately search for those letters, take them to a nearby book shop and ask for it to be read out. I think his name was Das… the book shop owner… or Ravi… I don’t remember. He taught me to write my own name,” she said, drawing alphabets in thin air.

“I went to him every day until I could read the letters myself. For three years, I was afraid to tell my husband that I could read and write. He received a letter from my uncle one day, I saw his face change as he read it. He hid the letter and went to work as usual. I read the letter after he left, only to find out that my mother had died. I waited for him to come home, I threw the letter at him and asked him why he had kept the information from me. He said nothing. I cried and cried. I even refused to cook for him, but I was living a thousand miles away from home. What could I have done? My husband died of Tuberculosis five years after that and ever since, I’ve lived alone. I wrote back to my uncle, but I did not receive a reply. I’ve thought about going back to my village, but what’s the point if there’s no one for me there? Now, I do the construction work here. I read out the instructions to the men around me and they don’t flinch. Maybe, it has got to do with how I look, but they seem to have made peace with it now. Anyway, you keep the money, I’ll get going,” she walked away, this time taking shorter strides than usual.

Srija U is a student of literature who writes to remember, and to forget. Most of her time is spent on converting lives to metaphors and photographs. She just graduated from Ashoka University, Delhi. 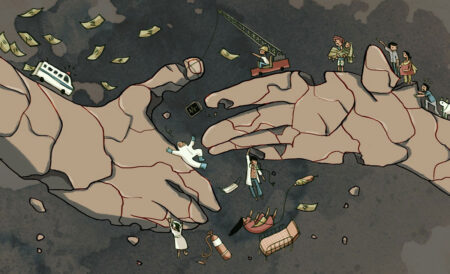 “When healthcare is privatised, women are the ones who face the most difficulties.” 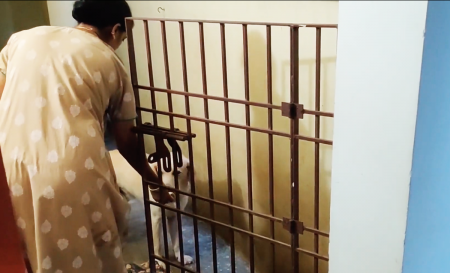 Here’s Looking at You, Mum! 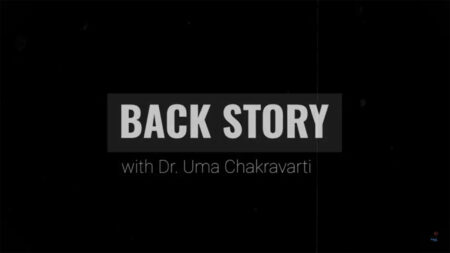